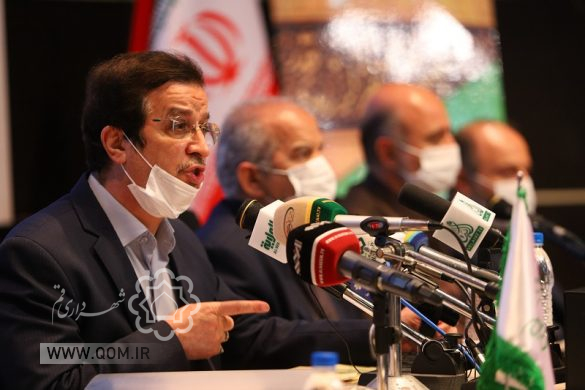 June 29, 2020. Mayor of Qom says the municipality  is seeking to expand sisterhood with other cities.

He made the remarks in a press conference which had been held by the Qom municipality on Monday.

f 98 journalists from Iranian and international Qom-based media were present at the presser of mayor of Qom.

Pointing that today more than 70% of the people live in the cities, Qom’s mayor asserted that municipalities, which are in charge of the affairs of the majority of the people, should enjoy national and urban resources.

Meanwhile, he went on to say that extensive measures have been taken in Qom Municipality in recent years in the field of investment, including hotel construction, adding that three 5-star hotels are being built on Payambar-e-Azam Boulevard in cooperation with the municipality.

The mayor said attracting pilgrims requires the strengthening of urban infrastructures, and accommodation and recreation areas should be standard and high-quality to encourage travelers to stay longer.

Saghaianiannejad added that attracting foreign travelers to Qom must be planned and done systematically in the form of a tour, and the private sector must take over this responsibility.

The mayor of Qom considered the relations with other municipalities in the form of sisterhood and said Qom municipality is not looking for a noninterest sisterhood. Sisterhood should be in a way that the municipalities of both sides benefit from the profits of this relationship.

He also noted that there are some sisterhood agreements with several religious cities, but expanding them should be included in the program.

He concluded that Qom Municipality’s International Affairs Department is expanding its activities and it would take serious steps in the field of sisterhood.