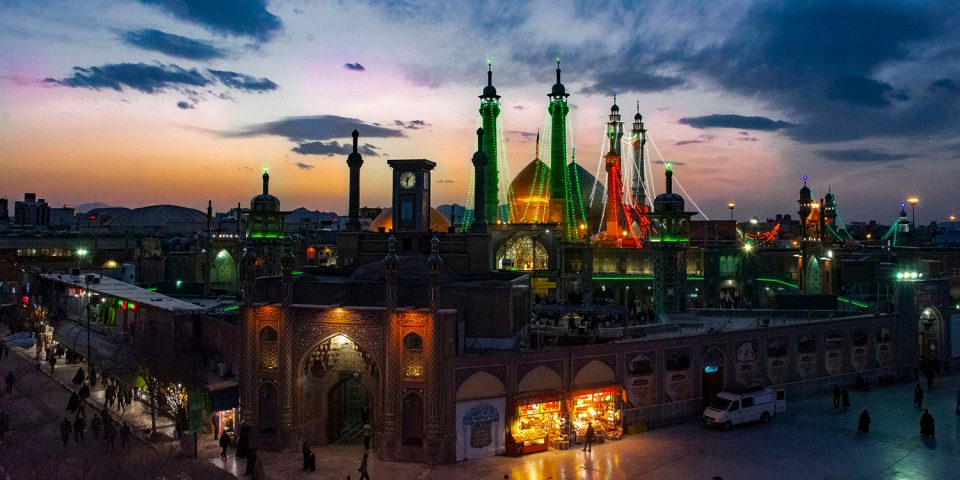 The noble name of this honorable lady is “Fatimah” and her most famous title is “Masumah”. The honorable father of Lady Fatimah Masumah (PBUH) was the 7th Imam of Shi′a, Imam Musa al-Kadhim (a.s.), and her respectable mother was Najmah Khatun (s.a.), who was also mother of the Eighth Imam of Shi’a Imam Ali al-Rida (a.s.).

Lady Fatimah Masumah (s.a.) was born on the fast of Dhul Qa’dah, 173 A.H [March 26, 790 CE] in Medina, Arabian peninsula. And at an early age she experienced the tragedy of her dear father’s martyrdom, who had been imprisoned by Harun in Baghdad, and thereafter, she was brought up under the care of her brother, Imam Ali al-Rida (a.s.).

In 200 A. H, following the insists and threats of Ma’mun, the Abbasid caliph, Imam Rida (a.s.) had to make a journey of exile to “Marv”, and His Excellency took this journey to Khurasan without company of any one of his house or relatives with him.

A year after his departure, with the enthusiasm of meeting her brother Lady Fatimah Masumah (s.a.) started to travel to Khurasan accompanied by some relatives.

They were welcomed by the people on the rout. In the course of her immigration Lady Fatima Masumah (s.a.) like her honorable aunt, Lady Zaynab (s.a.), would inform the devout and Muslim people about her dear brother’s being oppressed and abandoned; and she would state the opposition of Ahl al-Bayt (a.s.) and herself with the deceitful Abbasid rule. Thus, when her caravan reached Sāweh a group of government agents blocked their way and attacked them. As a result of the conflict, almost all men in the caravan were killed; and even according to a narrative Lady Fatima Masuma (s.a.) was poisoned.

On the rest of the journey Her Excellency fell ill due to the sorrow and heartbreak or according to a narrative because of the intoxication of the venom.

And because it was no longer possible to continue the journey to Khurasan, she decided to go to Qom and said: “Take me to Qom, as I have heard that Qomis the center of our Shi’a.” Receiving the news of caravan’s arrival. City seniors rushed to welcome her.

On 23rd Rabi a-Awwal, 201 A.H., while Musa ibn Khazraj, the head of Ash’ari clan, took the reins of her camel and an enormous number of people on foot and ride were moving around her palanquin, they arrived in Qom. When they reached the center of the city, her camel sat in front of Musa ibn Khazraj’s house, where is now called “Mir Square”, and he was awarded the honor of hosting Her Excellency.

Her Excellency lived in Qom for 17 days; during this time she was worshiping and praying to the God Almighty.

Her place of worship, now located at Ammār Yāsir Street, is called “Bayt al-Nūr [the House of Radiance]” and is a popular site with pilgrims to pay their respects. Ultimately, she died in exile with great grief.

On the 10th – or the 12th – of Rabī` al-Thānī, 201 A.H. she died in a foreign land with great grief before visiting her brother, and put Shi`a Muslims to grief.

People of Qom escorted her pure body to a place which was then known as “Bābelān Garden”. Once the grave was made ready and they wanted to bury Her Excellency, they were puzzled who should lay the holy body into the ground.

Suddenly, they saw two masked riders appear from the direction of the Qiblah. They came forward and recited the prayer, then, one of them entered the grave while the other passed the holy body to him. After the ceremonies of burial were completed, these two masked riders, without uttering a word to anyone, mounted their horses and rode off.

According to some scholars, these two noble persons were God’s proofs on earth, Imam al-Ridā (PBUH) and Imam al-Jawād (PBUH); who appeared in the site miraculously.